You’ve finally decided that a bidet is a good idea for you and your family. They are sanitary, effective and a pleasure to use. Not to mention they save money.

How do you know what size bidet seat will fit on your toilet, though? After all, it isn’t like every toilet looks the same. To remove the confusion, I wrote this handy guide on how to pick a compatible bidet seat attachment for your toilet size.

It isn’t complicated; it just takes a few minutes to determine the type of toilet that will work for your preferred type of bidet.

Read on for the instructions!

Elongated vs round toilet seat

The two types of toilet shapes are elongated or round. This describes the actual bowl and not the overall size of the toilet. A round toilet bowl does not extend as far as the elongated and more oval shaped bowl.

The problem is that round toilets look similar to elongated because they are not true circles or totally round. It may only be a difference of a few inches, but that difference could have you buy the wrong type of bidet seat.

In general, an elongated toilet seat reaches out front about two inches further than a round one.

The key is to look for a bidet seat attachment for round toilets or one for elongated. Below you will see tables with the best bidets for each toilet type. But, before you buy you have to determine which shape your toilet bowl is. 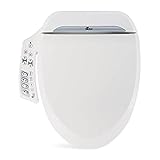 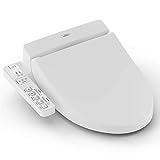 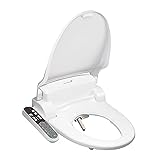 How to measure your toilet bowl

To determine if you have a round or elongated toilet, you need to make a couple of simple measurements.

Step 1 – Measure the distance between the bolts that attach the toilet seat to the bowl. It should be 5.5 inches unless you have an old toilet.

Step 2 – Measure the width of the bowl using the widest point. You should be using the outside of the rim to measure and not the inside since the seat will rest over the rim.

Step 3 – Measure the distance from where the bolts are to the front of the rim. If you have an elongated bowl then this should be at least 18 inches. A round bowl will likely be around 16.5 inches.

You now have the measurements that you need to make sure that your bidet seat attachment can fit securely on your toilet.

However, there is one more thing to consider and that is the type of toilet you have.

One piece vs two piece toilet

A one piece is literally a bowl and tank that are all from one piece of porcelain.

The reason this matters when you are buying a bidet is that the way the bowl connects with a tank can interfere with the installation of the seat attachment. You’ll need to look at the area behind the toilet seat to make sure that it is at a right angle where the bowl becomes the tank and that it isn’t a French curve style toilet.

What is a french curve toilet? 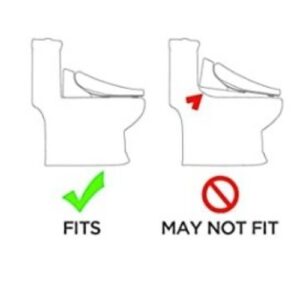 This is a one piece that has a curved style rather than a right angle where the tank and bowl meet. When it is curved, there is not enough space for the seat to fit flush with the bowl. You have to not only look for a specific bidet that works with one piece toilet, but also to make sure that you don’t have that curve as you will have difficulty finding the right one. 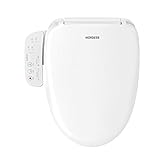 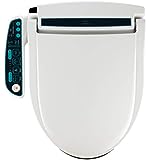 The most popular bidet seat attachment is the TOTO washlet, but it isn’t going to fit every toilet. Chances are that it will fit onto just about any toilet, but you have to know your toilet specs and then check out if they match up with the bidet. Which is why you should be checking out this PDF of the specs of this bidet. Of course, this doesn’t apply to all bidet seat attachments, so you have to look for the same type of chart for the specific model.

This is just to serve as a guide on how to check both your toilet and the bidet you intend to buy so you understand how to make sure they are compatible. 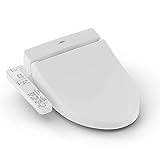 What to look for in a bidet seat attachment

Once you have the measurements done and you understand what the requirements are for your bidet, it is time to look a little deeper to see what your options are.
There are a lot of choices on features so you have to evaluate your wants and needs and then take a look at the compatible models.

The wand or nozzle of your bidet is what sprays the water. Some are always out especially on the non electric bidet versions. And some can retract with a possibility of self cleaning once the wand is retracted. Now, many people prefer the retractable version for hygiene and to have one less thing to clean.

Since this feature usually costs more money, it depends on your budget. Cleaning a wand if need be is not something difficult to do and would only add a second to when you clean your toilet bowl anyway.

Under seat vs full seat replacement

Another thing to look out for is the type of installation of the bidet seat. Some fit underneath the current toilet seat you already have. Others will replace the seat entirely. The electric versions will likely replace your seat altogether as they have a seat warmer function as well as a dryer in some cases.

Again, this is a question of budget as it is preferable to have the full seat model since it is more stable. Of course, an under seat bidet works just fine so if you don’t want to spend the money on the bells and whistles, you will still get a great bidet.

How the bidet sprays is also a consideration of the type of bidet you should get. For instance, some of them only spray in one direction. This is great as a bidet just for men, but women like having a spray that can also be used in front as well as back.

Not only that, but there are models in which you can control the strength of the spray and how concentrated it is. You may opt for more of a jet on some occasions and more of a fan on others to cover more area. In fact you can even use your bidet for an enema if you so desire.

Lastly, how luxurious you want your bum cleaning to be will also influence your decision. There are options for a night light, heated seat and even bluetooth control through a remote. The sky’s the limit for the extras that you may want to have, but keep in mind that these come at a cost.

Now that you understand how to size your bidet to your toilet, you can go out and buy one. I guarantee it will change your life as there is nothing quite like the cleaning power of a bidet.

If you have any questions, drop a line in the comment box below and I will get back to you ASAP.

link to Septic Safe Toilet Paper: What to look for

Having a septic tank can be a bit tricky. You have to be very mindful about what gets flushed and even put down your drains. Even toilet paper needs to be scrutinized as not all of it is septic...

The best toilet paper for sensitive skin is the kind that is free of dyes, fragrances and is nice and soft on the skin. The problem is that a lot of toilet paper is very rough, is loaded with...