Americans probably never had to question their bathrooms habits so much as during the toilet paper shortage due to the Pandemic.

People rushed to the Internet to find alternative methods to clean themselves after the number two and found out about the existence of a bidet. Now you are left to wonder whether it is worth switching from toilet paper to a bidet.

We were wondering the same thing and dug a little deeper to compare the two on 4 main levels: popularity around the world, sustainability, hygiene, and cost. Read on to make an informed decision on which of two is better.

Bidet vs toilet paper: Which is better for environment?

It does take water and electricity to make a bidet but you will be able to use the same bidet for years, potentially a lifetime making these resources worth the while. Think of how much toilet paper you will use in a lifetime and how much water, electricity, and trees it will take.

The main problem with toilet paper production is deforestation.

Trees are cut down to produce tree pulp needed to make traditional toilet paper and it leads to deforestation. Deforestation puts in danger species living in those forests, like boreal caribou, pine marten, and billions of songbirds.

Another issue with deforestation is that fewer trees absorb less carbon dioxide which increases its saturation in the atmosphere and adds to the climate change problem.

Some logging companies claim to do the right thing by replanting the trees after logging is done. However, it is impossible to restore a forest by simply replanting only tree species needed for future logging. It takes more than that to create a well-balanced ecosystem. Most importantly it takes time.

Of course, you can choose bamboo toilet paper or recycled toilet paper that don’t require cutting down beautiful forest for making it.

Let’s also keep in mind that it takes resources to produce toilet paper. It takes 1.5 pounds of wood, 37 gallons of water, and 1.3 kWh of electricity to make one roll of toilet paper as mentioned in Scientific American. And all it does is wipe our bums one time, that’s it, you can’t reuse it. Essentially you are just throwing away all of these resources. It essentially is in the same row with paper plates and cups.

Toilet paper production also uses chemicals to bleach and treat pulp to make soft white toilet paper that we are so used to.

Recycled toilet paper uses fewer chemicals but is known to contain BPA coming from ink and traces of plastic in the recycled paper mass. It doesn’t really put your health in danger due to the low amounts per sheet. But after millions of people continuously flush recycled toilet paper into the sewage system the BPA concentrates in the water putting water wildlife in that area in danger of infertility.

How much water does a bidet use

How do I know? Well, I timed myself while using a bidet and then measured the amount of water used in that time. Messy business, I got water all around the toilet, don’t try it. I warned you.

Now let’s put these numbers into perspective. An average person does number two 3 times per day using 9 sheets of toilet paper each time. Each roll of paper contains 150 sheets. It takes 37 gallons of water to produce a single roll. After performing some basic calculations we come to the astonishing 2.22 gallons of water needed to produce enough toilet paper for one bathroom visit.

That is at least 11 times more water than you need for a rinse with a bidet!

Here is a popular model of an electric bidet with a warm water option: 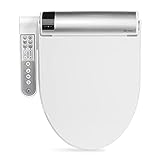 Toilet paper vs water: Which will clean you better?

Cleaning yourself with water after going to the bathroom will result in a cleaner anus with fewer bacteria remaining on it. Using water is also recommended for people with delicate skin to prevent rashes caused by toilet paper.

The research published in the Canadian Science Fair Journal demonstrated that fewer bacteria remained on anuses of the participants who used water for cleaning their bums after pooping compare to those who used toilet paper.

It makes total sense when you think about the way toilet paper wiping works. You basically smudging the remaining feces around the anus. There is no way to get yourself completely clean unless you use water.

That’s why some people go for wet wipes. But as we explained in one of our posts wet wipes are not a good solution.

Bidets can be more sanitary than toilet paper when are properly used and disinfected. It is important for women to direct water from front to back while using a bidet to avoid fecal contamination of the vulva. It is also important to wipe or wash the nozzle of your bidet before and after each use.

Studies conducted in Japanese hospitals showed that bacteria associated with feces was present on the bidet nozzles. They recommended disinfecting the nozzles regularly. Bidets are shared in a hospital by lots of people with different conditions so it is not a surprise.

Another study of women using bidets showed a decreased vaginal microflora and the presence of fecal bacteria on women’s vulvas. It tells you how important it is to use bidet properly, especially for women. It is recommended for women to direct water from front to back when using a bidet.

An average American family of four spends about $480 per year on toilet paper. The same family using a bidet will spend about $1 per year on water to operate the bidet and $22-$65 yearly on electricity.

That leaves you with over $400 to pay for the bidet itself and still save money in its first year of use. If you get a more expensive bidet it will still pay for itself in the course of a few years.

And with the toilet paper prices on the rise, it’s time to think about switching to a bidet. Read our post about electric vs non-electric bidets to help you choose one that is right for you.

Bidet vs toilet paper: Which is more popular worldwide?

There is no direct statistics to answer this question. However, around the world, more people use water rather than toilet paper to clean themselves after using the bathroom. Toilet paper is more popular among Western countries while bidets are popular in Sothern Europe, Japan, and South-East Asia.

What countries use bidets?

Here is the list of countries and regions that are known to use a bidet:

A bidet was originally invented in France in the 17th century. Its use around the world is tightly connected to religious and cultural norms. Bidets became popular in Christian, Islamic, and some Orthodox countries due to the strict religious rules about cleaning yourself after defecating.

Which countries use toilet paper?

While in most of the world toilet paper is used by at least some people, these are the countries that culturally prefer to use toilet paper after defecating vs using water:

Using paper for bathroom needs was pioneered by the Chinese and it makes sense – they are the ones who invented paper in the first place. Toilet paper was first mentioned in 589 AD by a Chinese Scholar.

Before that people all over the world were using different materials like wool, hemp, or lace to wipe themselves. I was always wondering why not everybody used water in the first place. And then I stumbled upon this comment on Quora.:

It makes total sense that places with cold climates would not adopt the use of water after going to the bathroom as the bathrooms most of the time were located outside in the freezing cold. Then even as the modern conveniences of heated housing emerged the habit just stuck with us.

According to Statista, Americans use the most amount of toilet paper per capita in the world (2018 data) with Germans and Brits following right after them. The average American consumes 141 rolls per year. That is almost 4 times more than an average Brazilian (38 rolls per year).

It turns out that the toilet paper that we are so used to is far from being the best choice. Bidets are more eco-friendly, clean you better, and will save you money in the long run.

If you have any questions or have something to add to my post please write a comment below and I will get back to you.

How much water does it take to make toilet paper?

It takes about 37 gallons of water to make 1 roll of toilet paper.

How to use less toilet paper

The best way to reduce your toilet paper consumption is to use a bidet or bidet shower. Using water to clean yourself is cheap, hygienic, and better for the environment. It will eliminate or drastically reduce your toilet paper consumption.
But if you are not ready for the bidet experience you can try to use these tips to reduce the amount of toilet paper you use:
1. Flatten the toilet paper roll. Push the roll to make it flat before placing it on the toilet paper holder. This will make it hard to spin the roll and will make you really think how much toilet paper you really need for each wipe.
2. Fold toilet paper instead of wadding it. Experiment with how many sheets actually get you clean. If you are not folding the paper you are probably using too much. The amount of sheets you would need highly depends on the quality of toilet paper you are using.
3. Substitute toilet paper partially or completely with cloth wipes or washcloths. Get a separate bin with a lid and place it near the toilet so that you can throw the used washcloths in the bin as soon as you are done with it. The downside of this method is you will have to do more laundry. You have to wash them separately from your other clothes at high temperatures.

link to Septic Safe Toilet Paper: What to look for

Having a septic tank can be a bit tricky. You have to be very mindful about what gets flushed and even put down your drains. Even toilet paper needs to be scrutinized as not all of it is septic...

The best toilet paper for sensitive skin is the kind that is free of dyes, fragrances and is nice and soft on the skin. The problem is that a lot of toilet paper is very rough, is loaded with...