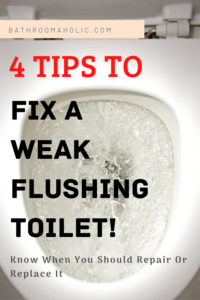 A sort of working toilet may be worse than one that is not working at all. At least a clog is obvious and you know you just need to unclog it.

When you are dealing with a slow flushing toilet, there could be a number of reasons why.

You’ll need to use some patience to figure out why your toilet doesn’t flush completely.

Should you call a plumber? Sure, but have your wallet ready.

Instead, you can use some trial and error and figure out the reason on your own. Then, you can make your toilet flush stronger after you’ve sorted out the problem.

Wondering where to start?

Just read on and we’ll get through this together and improve your toilet’s flush performance and end up with a stronger flushing toilet!

Why your toilet isn’t flushing completely

There are a few reasons it flushes weakly so we’ll go through the reasons from most likely to less.that way you can rule each one out as you go. If you get through the whole list with a weak flush still, then it may be time for a plumber or a new toilet.

1 - Could be partially clogged

The pipes where the water flushes out of the toilet could actually have some build up that is making it narrow. The pipe needs to be totally clear so the water can quickly rush out.

You could have hard water that is forming a crust on the inside of the pipe making it narrow.

Or, it could be residue from the waste that is being flushed.

How to test for a partial clog

Take a 5 gallon bucket and fill it with water. Then dump it straight into the toilet bowl. If it flushes quickly, then it is not a partial clog and you will need to continue the next steps.

If it still continues draining slowly, then it is definitely a partial clog.

How to fix a partial clog

I’m going to assume that you’ve already plunged your toilet to death when you first started noticing that it was draining slowly.

If that is the case, then you’ll need to use a toilet auger. Not to be confused with a drain snake. A toilet auger looks very similar and works the same way as a snake but is designed especially to clear toilet clogs. A snake won’t work here. I suggest a 6 foot long one as you don’t know where the clog is located within the pipes.

Sometimes your poop is big and hard and just doesn't want to go down. If this happens to you then read the full article on how to dissolve it!

This should get rid of any partial clog that you have. If it still flushes slowly after using the auger, then dump a few gallons of hot water (not boiling as it will crack the porcelain) to try to loosen the build up and try again. It may take several cycles of repeating this. 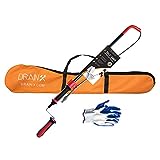 Around the inside of the toilet bowl rim are small jet holes where the water from the tank is forced through.

Since they constrict the water as it enters, it creates some force to push the water down through the drain.

When these holes get clogged, it can slow that whole process down.

If you have hard water then the holes can be getting clogged with minerals that accumulate there.

How to clean the jet holes

Use an old toothbrush with some vinegar to scrub away at the holes. It will take some elbow grease to get them clean and will only work if the build up is not too much. (By the way, this should be done every few months to keep them running smoothly even if your flush is working fine)

If they are still clogged, then you will need some acidic toilet bowl cleaner to get rid of it.

Just take a funnel and put it into the tube inside the tank where the overflow water goes into the bowl. Then pour some of the solution down into it and wait about ten minutes. Flush the toilet and see what happens.

It still might be slow but with some improvement. Take an allen wrench and wearing gloves, use the wrench to clean out each of the jet holes one by one.

Keep flushing the toilet as you go to get the crust out of the jets.

If it still flushes slowly but seems like they are still clogged repeat the process. If you don’t want to use a chemical you can do the process using warm vinegar instead. 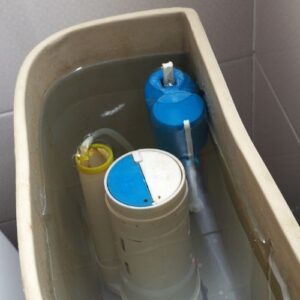 3 - Tank water level is too low

Your tank may not have enough water in it to use gravity to force the water through the pipes.

Check the level by looking at the overflow tube that runs into the bowl. The water should come up to about an inch below the top of it. If it doesn’t come up that far then your water level is too low.

To adjust how much water enters the tank, you can bend the arm of the ball that stops the water flow. It might sit too low and stops the water before it has a chance to fill the tank.

Flush and see if that improves the water level.

If you have the type with a float that slides up the mast, then there is an attachment that can be twisted to get the float to rest higher up the arm. 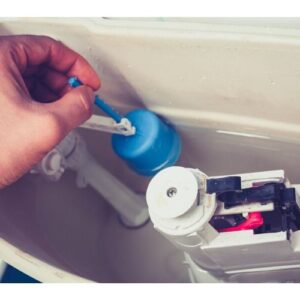 The flapper is the cover that lifts up and lets the full force of the water into the toilet bowl. Sometimes the flapper doesn’t seal the hole and water seeps into the bowl making there less force to flush properly. If you hear your toilet running then this is the likely culprit for your slow flushing toilet.

If the flapper doesn’t open all the way when you flush then that also weakens the flow.

Try repositioning the chain or rod depending on the type you have and either give it more or less slack. If it still doesn’t work then you should look into buying a new kit as the parts may be worn out.

Is it time to replace your toilet?

Before you decide to decommission your throne, it is probably best to call a plumber. If none of the above steps helped and you still have a slow flushing toilet then it may be best to have a pro come in.

If your toilet is old and not the most efficient anyway, then for a few dollars more than what it would cost to have a plumber come in and try to fix it, you can have a new, stronger flush toilet.

Take a look at some of the toilet types below that can increase toilet flush power.

If you are tired of your slow flushing toilet or it is always getting clogged, then a pressure assist toilet is the way to go. It has a tank within the tank so it forces water down through the bowl much more powerfully by using pressure.

They have a couple of pros, the first most obvious is that it clears your toilet and never has a weak flush. The second is it uses less water than your typical gravity flush toilet.

There are two downsides to using a pressure assisted toilet. The main one being the noise. It can be quite loud, but it only lasts a second or so. The other is that they are not easy to find in the big box hardware stores. Your best bet is Amazon.

One of the most popular versions is the powerful Zurn Z5572 Dual Flush, Elongated Pressure Assist.

If you don’t want to buy a whole new toilet, then you can retrofit your old one with the pressure tank.

The Flushmate M-101526-F31 FM III 503 Pressure Assist tank will fit in most two piece toilet tanks except for some Kohler and Gerber.

The best part is that you can install it yourself in less than an hour so there is no need to hire a plumber to do it for you.

Besides just a weak flush, if your toilet gurgles, then it is trying to tell you something.

The most likely scenario is that something has been flushed that is stuck but not completely clogging the toilet. Often it is a feminine product, or the so called flushable wipes that aren’t really flushable.

The gurgling is a sign that there is negative air pressure caused by the partial blockage that forces bubbles of air back into your toilet bowl.

If shredded pieces of toilet paper float back up when it gurgles, then it is a sure sign of a partial blockage. If using a plunger doesn’t work then take a toilet auger to it and that should do the trick.

A blocked vent stack on your roof could also cause this to happen. There could be leaves or other debris there so head up (Safely!) to the roof and check it out.

Whatever the reason for your slow flushing toilet, I hope the above tips helped you figure it out.

If your toilet still doesn’t flush completely after all of this then It probably is time to call a plumber or go for a pressure assist toilet.

Unfortunately, toilets are capricious and often problems start to come one after another once you start getting a weak toilet flush.

If you have any questions, then drop a line in the comment box below and I will get back to you ASAP! 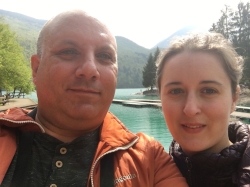 Denise
Hi we're Denise and Tony! We are new homeowners and the bathroom is our favorite room. We made this blog to help others like ourselves get all the useful information needed to build a better bathroom all in one place!

Latest posts by Denise (see all)

Hi we're Denise and Tony! We are new homeowners and the bathroom is our favorite room. We made this blog to help others like ourselves get all the useful information needed to build a better bathroom all in one place!

Are you looking for a way to enhance your shower experience and improve your respiratory health? Eucalyptus oil has been used for centuries for its medicinal properties. Extracted from the leaves...

Doing a steam shower conversion or adding a prefab steam shower is the perfect addition to any bathroom, offering a range of health benefits and relaxation. But with regular use, it's important... 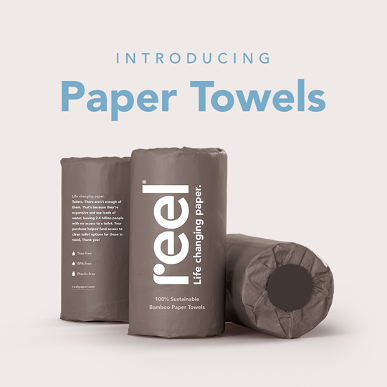