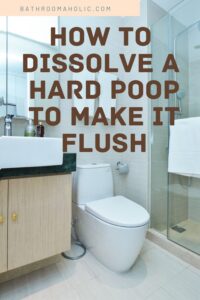 I’m not here to judge you for the large and hard poops you or your family do.

I am here to help you.

This may not be the most glamorous article I have ever written, but I do hope that it helps you solve your problem of your toilet not flushing your poop because it is too big or too hard.

Sometimes you can just leave it to soften and flush it later, but there are times when that doesn’t work. Luckily you do have a few options. If this is a recurring problem then my recommendation is that you go with a power assist flush for your toilet. I’ll go into those details further in the article, but for now, check out the link to see what it is.

This article is going to help you solve your “hard poop that won’t flush” problem once and for all!

Read on for the tips on how to dissolve poop stuck in your toilet!

Making the poop soft enough to be able to flush is the ideal solution to your problem. Some people resort to putting on rubber gloves and dealing with it manually. I won’t get into the details, but you can imagine what that entails.

Instead, try some of these chemical treatments to dissolve it. Some of them are common pantry items that you probably already have.

A bio enzymatic liquid is ideal for unclogging your toilet from too much poop.

The enzymes eat away at organic matter to soften it so it will end up flushing on its own. This particular solution has a bonus of eliminating the smell as well.

It is a much safer solution than other chemicals like hydrogen peroxide so I recommend having one on hand even if your hard poop was a one time thing. It is a good way to help a toilet unclog itself on its own.

I have a bottle of this or something similar at home in case of times like these. It even works well when your kitchen sink or garbage disposal gets clogged with organic matter. It’s a nice thing to have in a pinch.

For something homemade and that also doesn’t involve harsh chemicals you can use a remedy involving pantry items like distilled white vinegar and common baking soda.

You just need to add 1 cup of baking soda to your toilet and then follow it quickly with 2 cups of distilled white vinegar.

It will foam up quite a bit so hopefully there is some space in the toilet bowl if it wasn’t clogged and filled up.

Leave it for 30 minutes or so and then flush. It should be much softer and go down on its own. If it still gets stuck then you should use a good power plunger to force it down. At this point it will be softer and the plunger should make quick work of it. 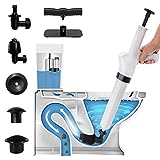 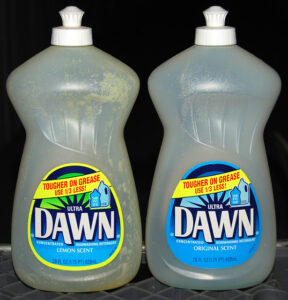 Dish soap liquid works similarly to the enzyme liquid. Think about how it deals with grease when you wash the dishes. It breaks it down. It does the same thing with hard stools so that it can be soft enough to flush.

Add 1 cup of dishwashing liquid to your toilet bowl. It is heavier than water and will sink down to surround the stool.

Let it sit for around 20 minutes or so and then flush. Again, it may not be totally dissolved at this point, but it should be soft enough to go down on its own. If it shows signs that it wants to go down, try a plunger.

You may need to repeat the process at least once to get it to go down on its own.

Your other options are to take matters into your own hands. If you can’t wait 30 minutes or more and don’t have a plunger (By the way, why don’t you have a plunger?) then you’ll need to don the rubber gloves and mash it up.

That should make it manageable enough to be able to flush.

Alternatively, you can use a spatula or knife to break it up if the thought of using your hand, albeit gloved, is a bridge too far for you.

Now, if the stool is way down in the pipes and is clogging the toilet then you will need a toilet auger or a toilet dredge that goes down into the pipe to dislodge it.

Don’t use Drano! It can damage your toilet and is quite dangerous if it splatters on you when you try to plunge it.

You should do yourself a favor and look into this system that will help you flush just about anything through your toilet pipe. If you have frequent hard poops that require some force to flush then this is the answer. Those methods above are great when you don’t have this problem often but if you have to do this every day then it becomes an issue.

The great thing about this device is that it fits in most toilet tanks. Then, you will never have a clogged toilet again. whether it is from a large poop or for some other reason.

Think about what those toilets are like in an airplane when they flush and you get the idea about the force of these power assist flushers.

Check out the ones below to see which one will fit your toilet make and model.

Always expect the unexpected when it comes to plumbing and fixtures in general. You may not always have too much poop to flush or hard stools that clog toilets, but expect it to happen eventually.

Have those tools and products stocked in your home so you have it at hand when you will eventually need it.

Have you ever had a stool too hard or big to go down the toilet? Tell us your embarrassing story by dropping a comment in the box below! 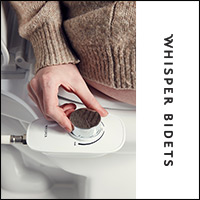